Transverse Nature of Light, Polarisation by Selective Absorption and by Refraction

The phenomenon of restricting the vibration of light in one direction is called polarization of light. This note provides us an information on transverse nature of light, polarisation by selective absorption and by refraction.

Transverse Nature of Light, Polarisation by Selective Absorption and by Refraction

This experiment showed that when a unpolarised light is an incident on the Polaroid P, the transmitted light has electric vector vibrating parallel to the transmission axis of P while the electric vector vibrating perpendicular to the transmission axis is absorbed. So the light transmitted through P has electric vector parallel to its axis only and the Polaroid P has made vibrations of light in one direction. The phenomenon of restricting the vibration of light in one direction is called polarization of light. Polaroid P is called polarizer.

A polarized light can be obtained by using a material which transmits waves whose electric fields vibrate in a plane parallel to a certain direction of orientation and absorbs waves whose electric fields vibrate in all other directions. Such materials are called polaroids and are fabricated in thin sheets of long chain hydrocarbons. In an ideal polarizer, the light with vector E parallel to transmission axis is transmitted and light with E perpendicular to the transmission axis is completely absorbed as shown in the figure.

The figure shows an unpolarised light beam incident on a polarizer. Since the axis of the polariser is oriented vertically, the light through it is polarized vertically. An analyser is set with its axis making an angle \(\theta \) with polarizer axis, and it intercepts the polarized beam. If E0 is the electric field of a vector of the transmitted beam, the component of E0 perpendicular to the analyser axis is completely absorbed and the component parallel to analyser axis is allowed to pass through it. This component is E0 cos θand 'f'light is polarized again along the axis of an analyser. Since the intensity of the transmitted beam varies as square of its amplitude, the intensity of polarized beam transmitted through the analyser is

Using Snell’s law of refraction, the refractive index of the material is

Brewster’s law states that the tangent of polarizing angle is equal to the refractive index of the material.

Videos for Transverse Nature of Light, Polarisation by Selective Absorption and by Refraction 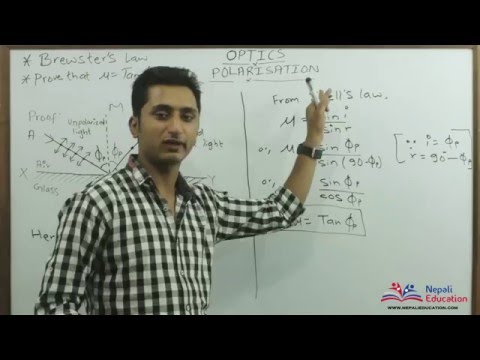 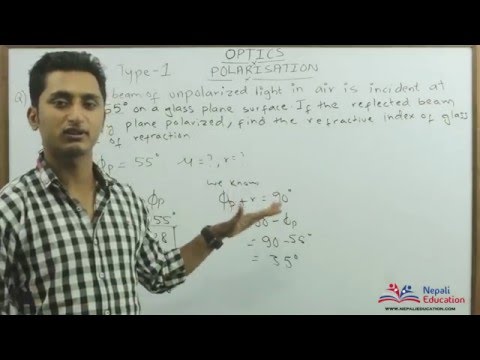 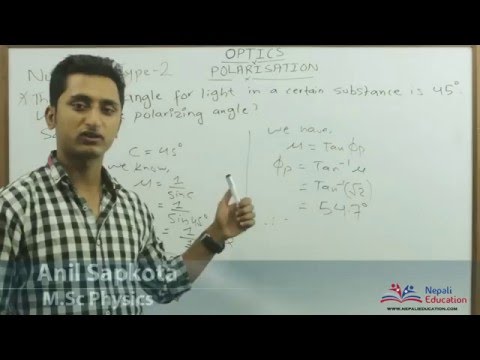