A magnet is a substance which has the capacity to attract magnetic substances like iron, cobalt, nickel, etc. This note provides information about magnet with its types and method of preparing it.

The first magnet was found from the naturally occurring mineral called magnetite. The ancient Greeks were the discoverers of magnetite. There is a story about a shepherd named Magners whose shoe nails stuck to a rock containing magnetite while roaming on Mt. Ida. Later, it was found that the mountain was made of black stone with iron that had a special property to attract iron. It was an ore of iron called magnetite. Magnetite occurs all over the world, but there are especially large deposits in Scandinavia. The magnet was first used as a practical magnetic compass by the Vikings in their travels to colonise or in war. A magnet is a substance made of a certain material that has the capacity to attract magnetic substances like iron, nickel, cobalt, etc. The energy possessed by a magnet is called magnetic energy. We use the magnet in our daily life activities. It is used in loudspeaker, telephone, radio, telegraph, dynamos, toys, electric motors, etc. Magnet has always two poles, south pole, and the north pole. Like pole repels and unlike poles attract. The most powerful magnet in the universe is actually a star called a magnetar. Earth itself is like a one big bar magnet. Some animals are affected by magnets.
There are two types of magnets which are given below,

Activity 2
Bring a bar magnet and suspend it freely with the help of nylon thread and stand. Then, rotate the magnet and observe the direction of the bar magnet after it comes at rest. Does the magnet show north- south direction after coming at rest? What do you conclude from this experiment?

Rubbing method
The artificial magnet can be prepared by rubbing strong bar magnet over the surface of magnetic substances for several times. It can be done by two methods,

Activity 4
Bring a long insulated wire, pieces of irons, soft magnetic substance (bar), battery and a switch. Then wind the wire over the bar for several times, join both ends of the wire with the battery and switch. Now keep some pieces of iron near the nails and turn the switch on. What happens to the pieces of iron when you turn switch on and off ? What do you conclude from this experiment? 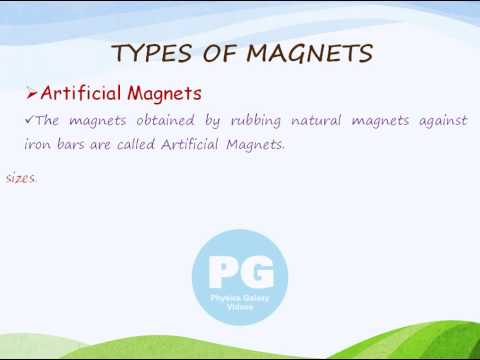 What is a magnet? Give one exmple of each type of magnet.

A magnet is a substance which has the property of attracting iron, cobalt, etc. There are two types of magnet which are as follows;

There are two types of magnet which are as follows:

Write any two uses of magnets.

Any two uses of magnets are as follows,

Write any two precautions while making an electromagnet.

Any two precautions while making electromagnet are as follows,

Permanent magnets are those magnets which can retain their magnetic properties for a long period of time. Any three devices where permanent magnet is used are as follows;

How is magnet made by the electrical method? Explain.

What is electromagnet? Name any three devices in which it is used.

What are the differences between the natural magnet and artificial magnet?

The differences between natural magnet and artificial magnet are as follows,

What are the differences between the permanent magnet and temporary magnet?

The differences between permanent magnet and temporary magnet are given below,

What are the differences between bar magnet and electromagnet?

The differences between bar magnet and electromagnet are given below,

A magnet is a substance which has the property of attracting iron, cobalt, etc.

Magnet was discovered by the shepherd boy, Mangers.

What are artificial magnet?

Give any two examples of artificial magnets.

Any two examples of artificial magnets are bar magnet and magnetic compass.

What are temporary magnets?

The magnets that can retain their magnetism only for a short time are called temporary magnets.

Write any one use of magnet.

Magnet is used in magnetic compass.

Any two methods of making magnets are rubbing method and electrical method.

Write any one precaution while making an electromagnet?

While making electromagnet, the winding should be done starting from only one side.

Write any three device where electromagnet are used.

Electromagnets are used in electric bells, loud speakers and fans.

What is loadstone? Which mineral does it contain?

Load stone is a natural magnet. Loadstone contain magnetite, a kind of mineral.

What are non- magnetic substances?

The substances which are not attracted by a magnet are called non- magnetic substances.

What are magnetic substances?

The substances which are attracted by a magnet are called magnetic substances.

What is molecular magnet?

The smallest piece of a magnet that has both north and south poles is called molecular magnet.

Write any two uses of electromagnet.

What are permanent magnets?

The magnets that can retain their magnetism for a long time are called permanent magnets.