Work is said to be done when the body moves through a distance when a force is applied to it. The capacity or ability to do work is called energy. The rate of doing work is called power. This note provides information about work, energy and power with activities.

We perform various types of work in our daily life. To perform work, we need energy. We cannot do work without energy. Work is said to be done when the force acts upon an object to cause a displacement. Energy is the capacity of doing work. Energy and work are measured in terms of a joule (J). Power is defined as the rate at which work is done upon an object. Power is related to how fast a work is done. The unit of power is watt (W) which is joule/second.

We need the energy to perform daily activities in our life. Food and respiration provide us energy. Energy is the capacity or ability to do work. The SI unit of energy is joule and in CGS system, it is erg. It has the only magnitude so it is a scalar quantity. Kinetic energy, potential energy, heat energy etc are some of the examples of energy. To calculate the amount of energy, we use the formula of work as the magnitude of energy is equal to the magnitude of work done.

There are various types of energy, which are as follows,

Heat is the form of energy which gives the sensation of warmth to us. It is obtained from hot bodies. Sun is the main source of heat energy. Heat energy can also be obtained from the burning of fuels like petrol, diesel, etc.

A sound is a form of energy which gives the sensation of hearing. It is produced due to the vibration of a body. It cannot travel through the vacuum. Some examples of sources of sound energy are a loudspeaker, radio, drum, noise etc.

Light is a form of energy which gives the sensation of vision. Sunlight is the main source of light energy which is used by all the living organisms of the earth. The burning of fuel like coal, petrol, etc also produce light energy.

We perform various types of activities in our daily life. These all activities are called work. Some of the examples of work are writing, reading, driving, etc. Work is said to be done if the force applied on a body changes the position of the body in the direction of force applied. The SI unit of work is Joule. Since work has the only magnitude without direction, so it is a scalar quantity. Work done is the product of force and displacement that is,
Work done (W) = Force \(\times\) Displacement (s)
\(\therefore\) W = F \(\times\) s
When 1N force displaces a body through 1m in the direction of the force then the work done is said to be one-joule work.

Work done by a force is zero when force is applied perpendicular to the displacement. Sometimes in some cases, work done by a gravity becomes zero. Like, when you move on the ground carrying a load of 5 kg then work done by gravity is zero. But the work done by you is not zero. There are two types of work which are as follow,

When 1-joule work is done in 1 second then the rate of doing work is said to be one-watt power.

A horsepower is a unit of measurement of power. The electrical equivalent of one horsepower is 746 watts in the international Systems of Unit (SI). It is mainly used in engineering and is denoted by H.P.

Videos for Work, Energy and Power 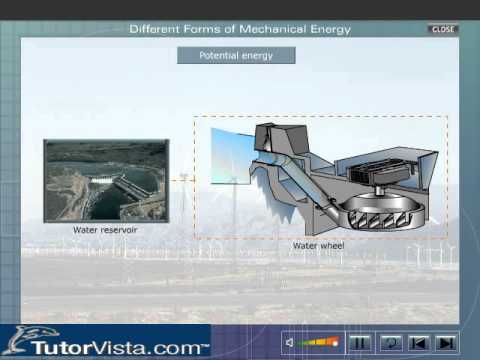 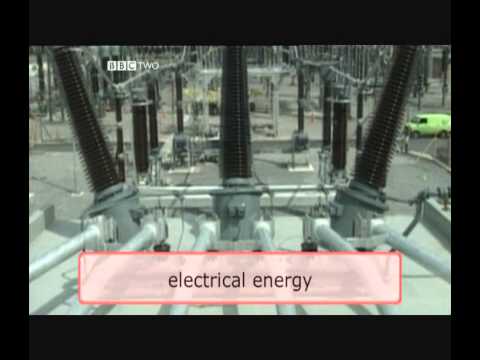 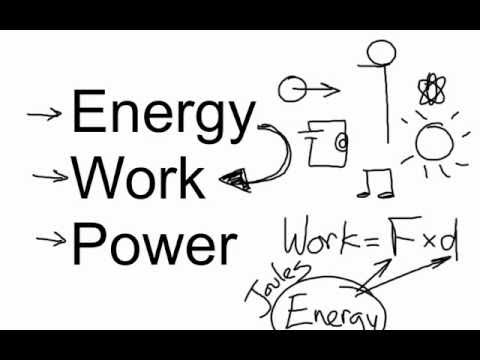 Derive the equation of kinetic energy.

Define potential energy with two example and derive it equation.

Define heat energy and sound energy with two examples of each.

When one joule work is said to be done? Write down the formula relating the work, force and displacement.

The work dine is said to be 1 joule when 1N force can displace a body through 1m distance in the direction of the force applied. The formula relating the work, force and displacement is,
Work (W) = Force (F) \(\times\) Displacement (d).

A porter is standing with load on his back, Is he working or not?

When a porter stands with load on his back, he does not do any work or he is not working. Because in science, to do work, the force applied always should cover a certain distance. But the porter is not covering any distance.

Give any six examples of potential energy.

Any six examples of potential energy are given below:

Any six examples of kinetic energy are as follows,

Define work done. Write types of work done with two examples of each.

Work is said to be done if a force applied on a body displace the body in the direction of the force. There are two types of work done which are as follows,

A man displaces an object to a distance of 10m by applying 50N effort. Calculated the work done.

A labor displaces a box to a distance of 25m. If the work done is 5000J then calculate the effort applied by the labor.

Calculate the displacement of the body if the force applied is 100N and the work done is 2000J.

Calculate the amount of force applied when a body is displaced to a distance of 25m. The amount of work done is 2500 joule.

If a person does 5000J of work in 50 seconds then what is the power of a person?

Calculate the power of the men if he does 2000J of work in 50 seconds.

Calculate the time taken fir a men if he does 2500J of work and power is 50 watt.

Calculate the work done by a man if his power is 60 watt and time taken to do a work is 12 seconds.

What are the differences between power and energy?

The differences between power and energy are given below,

What are the differences between potential energy and kinetic energy?

The differences between potential energy and kinetic energy are given below,

What are the differences between workdone and energy?

The differences between work done and energy are given below,

The ability or capacity to do work is called energy.

The energy possessed by a body at rest is called potential energy.

What is heat energy?

Heat energy is a form of energy which gives sensation of warmth to us.

What is sound energy ?

Sound energy is a form of energy which gives sensation of hearing.

What is light energy ?

Light energy is a form of energy which gives sensation of vision.

What is magnetic energy ?

The energy possessed by a magnet is called magnetic energy.

What is chemical energy ?

The energy produced from the chemical reaction of a substance is called chemical energy.

Power is defined as the rate of doing work.

When 1N force displaces a body through 1m in the direction of force is called 1 joule work.

What is nuclear energy ?

The energy which is obtained through nuclear fission or nuclear fusion is called nuclear energy.

What is SI unit of power ?

What is SI unit of energy ?

The SI unit of energy is joule.

Electrical energy can be defined as the energy produced due to the continuous flow of electrons through a conductor.

What do you mean by work done ?

Work is said to be done if a force applied on a body displaces the body in the direction of the force.

Any two sources of heat energy are sun and petroleum.

What is one watt power ?

The rate of doing one joule work in one second time is called one watt power.

Any two sources of sound energy are loudspeaker and radio.

What is the major source of light energy ?

Sun is the major source of light energy.

The energy possessed by a body in motion is called is called kinectic energy.

What do you mean by work done against friction ?

Give any two examples of work done against gravity.

Any two examples of work done against gravity are lifting bag from the ground and lifting water from the well.