The life cycle of a mosquito completes in the following four phases:

The eggs are hatched into larvae within 2-3 days under suitable conditions. These are transparent and emerge from the lower end of each egg. They are also called Wriggler because of their caterpillar like movements. The body of larvae is divided into head, thorax, and abdomen. The larva of a culex mosquito at rest hangs at an angle from the surface of water whereas the larva of an anopheles lies parallel to the surface of water.

After about a week, the larva moults for the last time and develops into pupa. They are commonly known as tumblers. The body of pupa is comma-shaped. The pupa of a mosquito is very active in comparison to the pupae of other insects. Pupa metamorphoses into mosquito after a short duration.

After metamorphosis, the pupa develops the body organs. Thus animago is formed. Imago is a complete insect stage in which mosquito is completely young. The imago emerges when the pupalskin splits. The mosquito dries its wings by vibrating and then flies in air. After mating between male and female, the female starts laying eggs. The complete lifecycle from eggs to adult takes ten to several days.

The periodic shedding of the outer layer of the skin of larvae of insects to allow further growth is called Moulting.

Differentiation of tissues inside the puparium of insects is called Histogenesis.

Period of rapid transformation from larval to adult stage is called metamorphosis.

Videos for Life Cycle of Mosquito

Life Cycle of a Mosquito 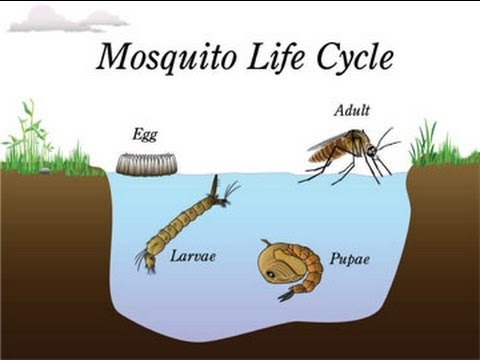 Why do mosquito larvae die, when oil is sprayed is on the water?

Mosquito larvae breath with the help of respiratory trumpets. During respiration it is on the surface of water and then oil enters inside it which closes trumpets. Hence it dies.

Mention the phases of life cycle of mosquito?

The lifecycle of mosquito completes in the following four phases:
a) Egg
b) Larva
c) Pupa
d) Adult

Where do mosquitoes lay eggs?

Mosquitoes lay eggs in stagnant water of pond and ditches.

The study of the lifecycle of mosquito is important for its control, why?

What does mosquito larva feed on?

Mosquito larva feed on algae and bacteria found in water.

Name the stages, which spend in water in the life cycle of mosquito.

The stages which spend in water in the life cycle of mosquito are:
i) Eggs
ii) Larva and
iii) Pupa